In the wake of the Facebook IPO earlier this year, its less than stellar launch, and the subsequent pressure from shareholders to generate revenue, Facebook has been experimenting with a variety of new advertising opportunities. I use the term experimenting, as my experience this past week has me believing I am a beta tester for both a product and a service that clearly has some bugs.

A client who had recently purchased a well-established B2C parts supply business was seeking to expand his marketing and advertising efforts. As a mail order catalog business started in the eighties, the previous owner wasn’t particularly tech savvy and left the new owner with absolutely no marketing data on which to make any educated online marketing decisions.

My research identified that we could reach 333,920 of his targeted prospects via Facebook advertising. They could be targeted by geo-location, age, sex, interest in the sport/industry his parts supply, language and prior experience with the brand; meaning they weren’t already Facebook Fans.

Being relatively new to Facebook, with limited resources behind the initiative, the brand only had 82 Facebook Fans when we began. I decided that the first thing we had to do was to raise that number dramatically. With a budget of $10 per day, my client and his staff were giddy with glee when they found the number of Fans growing at a rate of approximately 5 per hour/ 24 hours a day. There were internal bets on both the rate and sustainability of growth.

We reviewed the many claims of false Facebook profiles and suspicious Fan bases reported by others. In making a spot check of the new Fans, we determined that these new Fans were in fact participants in the targeted sport. Even if a certain percentage of the fans were bogus profiles, the numbers were still compelling enough to warrant the advertising tactic a success.

With a feather in my cap, I decided to be a sport and invest another $10 per day in their Sponsored Stories advertising opportunity. The Sponsored Story identifies the same brand message as coming from the Fans who have liked the brand, as opposed to coming from the brand itself. It is targeting the friends of the brand’s Fans.

As with our first campaign, it took about 18 hours for the ad to be approved. Recognizing that the Sponsored Stories campaign had a smaller target audience (a subset of the initial target), we weren’t surprised to find a slower growth rate in additional new fans. That being said, the click through rate of 1.19% was nearly twice that of the initial campaign, so the results were certainly respectable.

This is where I had to remind my giddy client that a Facebook Fan is not a business objective, and that we now needed to focus on turning all of these new Fans into paying customers.

The Monday following the launch of our two Facebook Like campaigns, I received both a phone call and an email from a member of the Facebook Client Partner team soliciting me to sign up for their Start to Success Program. Available to advertisers who had spent less than $500 on Facebook advertising and who were willing to commit to a $50/day advertising budget, the program is designed to offer live one-to-one assistance with Facebook advertising.

We weren’t able to connect until the next day, by which time I had experienced the frustration of trying to unsuccessfully launch yet a third ad campaign, this one designed to drive traffic to the client’s website, as opposed to simply garnering Facebook Fans.

We worked via WebEx so that the Facebook representative and I were looking at the same screen. With her support, we both revised the ad with the link to the client’s website I had developed earlier as well as created an additional ad campaign. This campaign was for a discount coupon at a consumer trade show in Michigan starting the end of the week. For this fourth ad campaign, the objective was to offer a discount coupon to the same target audience, but only those who lived in Michigan. The coupon would be claimed from the clients website, so this campaign also included a link away from Facebook, as opposed to the initial two campaigns that were designed to drive Facebook Fans and kept the traffic within Facebook.

From here, the experience digressed into a situation I commonly refer to as FUBAR (I’ll let you look up this military slang if you dont know what it means). Facebook would send me an email stating the ads had been approved, yet when I went to the Facebook Advertising Dashboard, it showed that my ads weren’t running. When I logged into the Dashboard using my personal Facebook login and I accessed the account as an Admin, the information I was presented was dramatically different from the information I saw when I logged into Facebook using my clients login. This information was also different from the information I saw when I was logged in using WebEx on the Facebook Client Partners computer.

With each new revelation I would contact the Facebook advertising representative, who would advise me that she was forwarding my information on to their technical department. I also wrote into Facebook using the link on their advertising page, and received no response. With money in hand, a looming event deadline and a sales representative, the only solution offered by Facebook was the recommendation that I try to create yet another ad.

Really? That’s the best you can do Facebook? You have failed, with the support of your marketing and IT departments to get an advertising campaign operating in four full business days and the best you can do is offer to have me waste more of my client’s money and my time to go back to square one and try it again? As I like to say, the definition of insanity is doing the same thing over and over and expecting different results.

Being ever the optimist, and not one wanting to allow software to beat me, I remember a solicitation received the week before for the new Facebook Offers program. 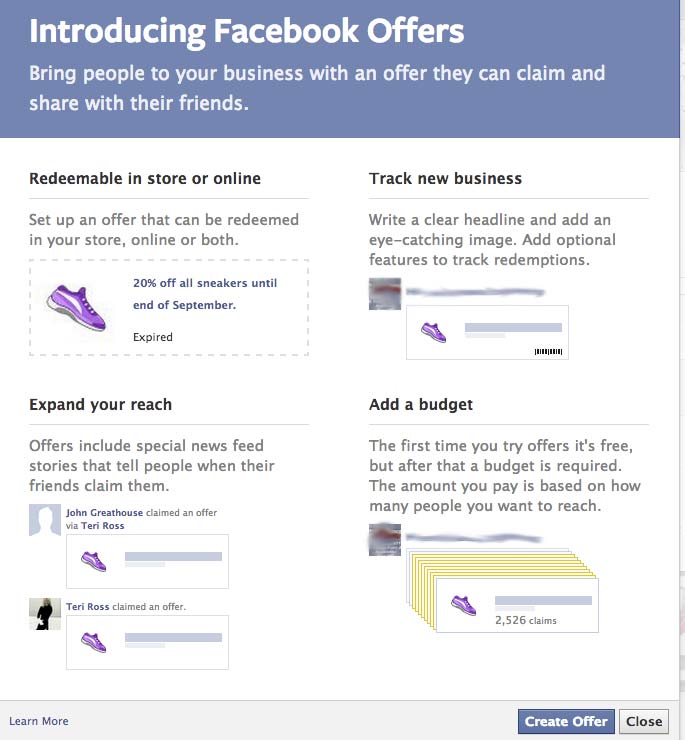 That they are offering to let me try it for free makes it a no-brainer. That is, until I discover that the only options for targeting these offers are to people who like your page and to people who like your page and their friends. Why wouldn’t they enable the ability to geo-target as they do for the rest of their marketing opportunities? Without that capability, Facebook Offers are of no value for offline event marketing. Oops. Someone didn’t think that through.

Unfortunately, one week after the experiment, neither of the two advertising campaigns designed to drive traffic to the website were running. I reached out to the Facebook marketing representative, who advised me six hours later that the “little bug” in my account had been fixed.

I looked at the account five days after this response, and found the following stats:

Both of these campaigns had identical target audiences, budgets, time frames, creative and campaign settings. And yet, the ads seeking Facebook Likes had a campaign reach of 84,823, while the campaign reach for the ads seeking a click to the client’s website had a campaign reach of 308. The CPC campaign for Likes generated a $150 ad spend, while the campaign for clicks to the website generated no clicks and no ad spend. It kind of makes you think the Facebook Edgerank algorithm is VERY heavily weighted for presenting ads designed to keep visitors on the platform. Is this going to make shareholders happy?

I am confident that I am not the only one having these technology, reach and support issues with Facebook advertising. I am also confident that some advertisers are having no issues. It’s not easy to build an advertising platform that supports the myriad of operating systems, browsers, file formats and permission requirements of online marketers. I am confident Facebook will resolve these issues. Whether or not they can do it fast enough to satisfy their prospects, customers and investors remains to be seen.

The good news is that while writing this article, the client has received 11 more Likes on his Facebook page. The company now has 1,914 Fans, and the number continues to increase. We are also seeing a sharp increase in traffic to the website and have even made some sales. The conversion rate from Facebook is nearly 3x that of Google traffic. Great results that weren’t easy to obtain.

As a Marketing Technologist, I drive double digit lead and revenue growth. I use a data driven strategy that identifies the ROI of all marketing initiatives. I have worked with Fortune 500 companies, SMBs and many start-ups in driving a variety of e-commerce, lead generation, inbound marketing and web analytics marketing initiatives. My passion lies in delivering measurable results that exceed client expectations. -your CMTO